How long does concrete take to set?

Contents Hide
1 Short summary
2 Concrete Composition
2.1 Cement (clay and lime)
2.2 Grainy rock (gravel or sand)
2.3 Additives (depending on application, etc.)
2.4 Mineral water
3 What happens when concrete hardens
4 How long does concrete have to harden?
5 When is concrete completely cured?
6 Temperature as an important factor
7 Foundations, components and co. ready with fast concrete
8 Any more answer
9 Curing or harding process
10 Other Post

How long concrete has to harden, this question arises at the latest when a foundation has been poured, a base has been placed or a stair has been shaped.

Contents Hide
1 Short summary
2 Concrete Composition
2.1 Cement (clay and lime)
2.2 Grainy rock (gravel or sand)
2.3 Additives (depending on application, etc.)
2.4 Mineral water
3 What happens when concrete hardens
4 How long does concrete have to harden?
5 When is concrete completely cured?
6 Temperature as an important factor
7 Foundations, components and co. ready with fast concrete
8 Any more answer
9 Curing or harding process
10 Other Post

So how long does it take to harden concrete, how many weeks after concreting can the corresponding concrete surface be walked on or built on? In this guide you will find answers to these and other questions.

Because when concrete reaches the desired degree of hardness depends not only on the past time, but also on the concrete mix, temperatures and other factors.

The time it takes for concrete to set naturally also depends on the quantity used.

Here is a brief overview of the individual stadiums:

You got the concrete set. Now what?
BECOSAN® treatment for concrete floors

To understand why concrete actually has to set and harden, you can take a look at the individual components. Concrete consists of the following components:

Concrete is therefore a wet mixture of rock, clay and lime. It should be known that these fabrics have taken a very long time to dry individually. This makes it possible to estimate the time required for drying and curing concrete as a mixture of clay, lime, sand and other materials. Logically, it takes more time for larger volumes with a smaller surface area than for concrete with a large surface area but comparatively small volume. 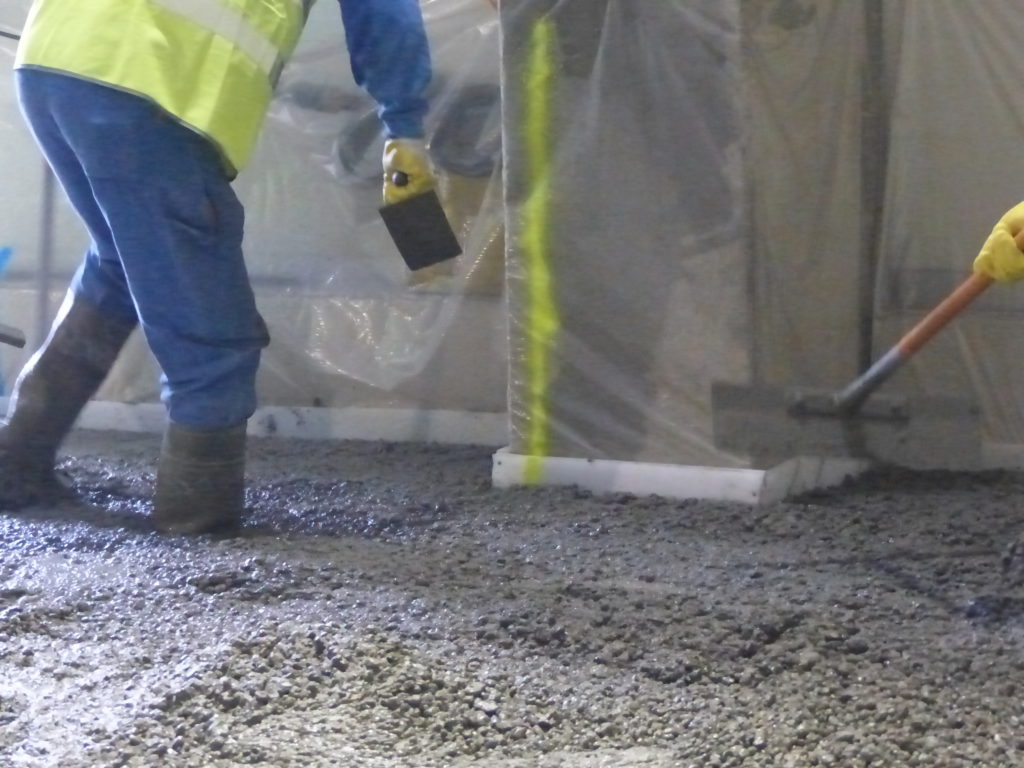 What happens when concrete hardens

The first step in concreting, after creating a mould in which the liquid concrete is poured and cured, is mixing the concrete. This brings together various components that have already been described above.

Thus it interlocks with each other and with the other components.

The stone chosen according to the type of concrete to be mixed is thus surrounded by the resulting cement and what comes out in the end is called concrete. Now one could think that the water only has to evaporate in order for the concrete to harden.

This is only half correct, because the water in the concrete mix continues to strengthen the concrete; in technical jargon it is called “setting”.

How long does concrete have to harden?

Concrete must regularly achieve a standard strength / minimum compressive strength until it can be built on or installed. At ideal temperature, i.e. plus degrees above 12°C or even higher, and normal ambient humidity, this is the case on average after 28 days.

So you can start around one month if you want to be on the safe side and do not want to prematurely load the cast foundation, the base or other construction elements and thus possibly damage them.

The standard strength should not only be kept in mind by experts, but also by DIY enthusiasts, in the garden or in hobby projects.

Four weeks or 28 days as a guideline are not to be undercut. Whether garage, cellar, house or parking lot: concrete must harden sufficiently and reach the minimum compressive strength so that it can be further processed or treated – before flowing lay as well as before concrete sealing.

When is concrete completely cured?

Concrete does not harden properly after 28 days or even after a few days of waiting. It usually takes years before concrete is completely cured.

After concreting, the mixture of clay, rock, water and possibly other materials described above reaches its shape through casting and its strength through crystallization / setting.

Building on the created surface or building with the created components is then possible with the standard strength. The moisture content is often only at a normal level after months. 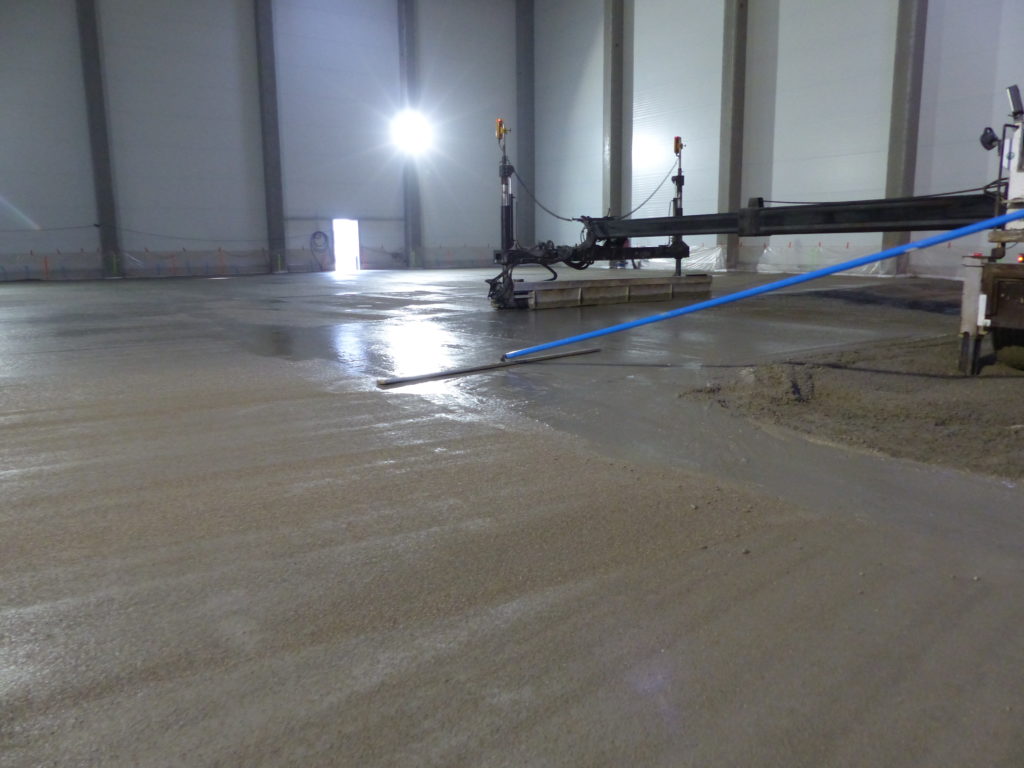 Temperature as an important factor

As already mentioned above, the previous data have been listed with regard to an ideal temperature and ambient humidity. Concreting in the deepest winter should therefore be avoided. The chemical process that takes place during setting slows down at low temperatures and stops at -10°C completely.

In addition, curing concrete at 5°C takes twice as long as 20°C, i.e. around 60 days. The concrete should be protected from frost. Concrete is frost-proof from a strength of 5 N/mm². This value is usually reached if the concrete can be kept above 10°C for three consecutive days after pouring.

In the case of fast-hardening concrete, also known as fast-setting concrete or fixed concrete, further contents come into play in addition to or instead of the components described above.

Other binders added to the concrete mix also lead to a faster compound, catalysts accelerate the chemical process of setting, etc. As the setting is accelerated, the hardening process is also more rapid.

Depending on the brand and mixing ratio, rapid cement or concrete produced with it has a setting time of half an hour on average. However, complete curing also takes much longer.

This type of concrete is not used for building houses and other large-scale construction projects. For the foundation of the garage, for the rotary clothes dryer in the garden or the hole in the wall, however, the fast cement / fast concrete from the DIY store is suitable.

More answers, tips and tricks will follow at this point. Browse our website and get valuable information about concrete and concrete protective sealer. The silicification and impregnation of concrete surfaces ensures that they are smooth and protected down to the depth against liquids, dust and dirt. Water, oil and acids as well as mosses and algae can be effectively kept away – from the foundation in the garage to the floor in the workshop, apartment building and warehouse.

This is and old video but you will get a overall idea of what concrete is made for and a little but about his history.

This demonstrates the curing or harding process by explaining the chemical reactions during the introduction of moisture.